Anyone want to chip in for Pixar?

Anyone want to pool their money together and buy Pixar? It's only 5Mil+ er..that should be 5Billion:) I figure we could all chip in a few dollars and buy it from Disney. I'm sure we would all enjoy taking care of it, and feeding it, taking it out for walks, encouraging it's short film department. But we all have to share taking out the little box or I'm taking it back.

Sorry for the no postie for a while. I've been busy. I've been working lots of OT and also doing Animation Mentor stuff. I'm a substitute and it looks like everyone wants to take time off around October-December (no surprise). So I've been up to my eyeballs with work.

In the meantime, who doesn't want to read a blog done by Pixar animators:

http://splinedoctors.blogspot.com/
Posted by Ethan at 4:06 PM No comments:

Anyone who knows me very well knows I'm an animation history fan. ASIFA-Hollywood is working on creating a virtual archive of old animated cartoons. I love this idea. They have a blog, and they're currently trying to get the blog itself to be noticed. Apparently Google has removed it's submit form, so ASIFA is trying to get recognized by having bloggers link to it.

Here's my small effort to the cause:

Thanks Jim for pointing it out.
Don't worry, your forgiven for your spoiler:)
Posted by Ethan at 7:43 PM 1 comment:

You can check out the first four minutes of Chicken Little here:

Spoiler:
I'm not so sure about the several false beginnings. The old gag of "Once Upon A Time..." is tired and old. Especially in this context where Disney has their bookend beginning, the the new Disney logo, then false beginning, and another one, another one, etc. It makes you want to say: "Get on with the film alredy!"

But once you do get into the film, I think it looks really good. I have to say that I'm pretty excited about this film. I hope it stays good.
Posted by Ethan at 3:04 PM No comments:

Wallace and Gromit: The Curse of the Were-Rabbit

Wendsday night is date night for my wife and I. It's the night that Allison's mom takes care of our spawn and we get to do something my ourselves for a little while. Sometimes this involves seeing a movie. We were tempted to see MirrorMask, and part of me wonders if we should, I don't know if it will last in the theater much longer. But my wife said it was my decision. Wallace and Gromit was playing at my favorite theater: The Cinaramadome and I just couldn't miss seeing it in such a good theater.

I have to say, not only is this one of the best animated films I had ever seen, it's one of the best films I have ever seen. This is easily the best thing that Aardman has done, and I'm a big fan of Aardman's work. I don't want to say anything more, I don't want to spoil anything (unlike Seward St did last week, I really wish he would not have done that). Talk about classic film making techniques, he really established the characters, their historys, and their obsessions with one camera pan before the credits even came up. It reminded me of Hitchcock's Rear Window. All the characters are top notch, with great animation. The rabbits are just amazing, I don't know how they did so many at once. It also has great references to Jaws, Teen Wolf, and American Werewolf in London to name a few.

Go see it, you'll enjoy it quite a lot. I certainly had a great time.

It was also nice to see that they listed the baby's born during production of the film (Production Babys). A couple good friends of mine had a baby named Felix who I was happy to see in the list. I was really hoping Quinn would make it into Madagascar's credits but they didn't do that:(

I should add that the night was toped off by gong to Ameba next door and finding not one, not two but three really rare DJ Shadow Live CDs, all used, all for under 8.99. It was just a good night all around:)
Posted by Ethan at 8:15 AM 3 comments: 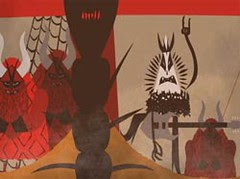 It took me a long time to see this video by Joel Trussel: "War Photographer". His website has been hit a lot after getting rave reviews on Drawn and ColdHardFlash. But the video was moved and I was finally able to check it out. I have to say it's one of the coolest things I've seen. Awesome character design, awesome idea, great timing. Very cool. Check it out:

I haven't been able to make it to the new Wallace and Gromit film (I have a 14 month old at home, I'm lucky if I get to see The Daily Show let alone the cinema). It looks like the warehouse that housed all of Aarman's history, including the sets to all the Wallace and Gromit films, and all of Aardman's stop motion history burned down lat night. Thankfully no one was hurt. To read more look here:

It's sad to loose all this history. I don't think this will stop them from making new films. Especally with W&G opening the number 1 spot with: 16.1M
Posted by Ethan at 9:02 AM 1 comment:

You were talking to your friend at Resfest waiting for the second screening of Cinema Electronica to start. I was the nerdy one with the Harry Potter book also waiting for the show to start. You were talking about uploading your latest homework and about Jason's grease pencil tool. I was sitting next to you. You asked something about the mentors. Before I turn and say hello, the show stared.

I hope you got your homework uploaded.

Explenation: (In Seattle, in the newspapers have a persanalls collum for people who see other people and would have liked to say hello, but for some reason or other didn't get a chance to. The collum was there to help those people get a second chance. I'm not trying to pick up on anyone here, but I thought they style was appropreate for this.)
Posted by Ethan at 4:16 PM 1 comment:

If you see a lot of deleted comments, that's not because someone said something I disagreed with, it's because I've been hit with a lot of spam in my comments area. I'm trying to get rid of them as fast as they come to me. Feel free to comment, and/or disagree, I'm open to discussion, but do not to spam. And if you see a link in the comments field, something that doesn't look like it's really an animation comment, please do not click on it. I do not get paid for anything I write here so you can only hurt me by clicking on it.
Posted by Ethan at 11:15 PM 2 comments: