Jim Hill Media has a long article about John Lasseter touring/starting his new job at Disney as the new Chief Creative Officer. The article reads like a dream come true. I mean it really sounds like the best thing to happen to WDFA and WDI. Could it be true? I hope it's all true. The Nominations for the Academy Awards came in today, although the biggest announcement for me was that John Stewart was going to host the awards. I'm a big fan of The Daily Show, so I know I'll be watching out for him. Brokeback Mountain got 8 nominations which is pretty big news for a non-Blockbuster-FX heavy type film:


Best Animated Short:
Badgered
The Moon and the Son: An Imagined Conversation
The Mysterious Geographic Explorations of Jasper Morello
9
One Man Band

Best FX:
The Chronicals of Narnia
King Kong
War of the Worlds

I haven't seen Corps Bride yet, (I'll be picking it up on DVD today, from what I've seen the animation is incredible), but I hope Walace & Gromit in the Curse of the Were Rabbit gets the award, it's a very solid film and one of my favorites from 2005. I haven't seen any of the animated shorts yet, I'd really like to, they usually do a screening of the nominated shorts at work I'll have to catch that. There's no question about King Kong winning, and there's no question about Brokeback Mountain winning either, I'll be surprised if it doesn't get all 8.

Cartoon Brew noticed that of all the nominated Animated Features, for the first time, none of them are CG films. I didn't notice this the first time I looked at the list, but it's true, and kinda cool. Sure they used some CG animation in Walace & Gromit and in Howl's Moving Castle (I don't know about Corps Bride) but they're not fully CG films.
Posted by Ethan at 9:00 AM No comments:

I stumbled across this website and thought I should share it. It's by animator Antoine Antin, I don't know much about him but he has some really nice looking stuff, check out his films and videos: 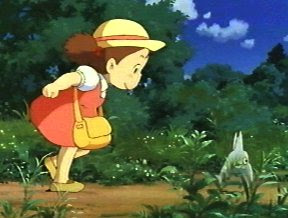 I showed Totoro to my daughter for the first time this week. She's a year and a half so I didn't know if she would like it or not. I was especially worried about the beginning, I thought it might be too slow or boring for her. But she was glued to it from the start. I think it's because she really liked watching Mei more then any other character. I assumed when I started to play it for he that the big Totoro would be her favorite but she really seemed to be into the kids more. That didn't stop her from giggling up a storm when the first two little Totoros started showing up. I was impressed, it really is a good movie. I didn't have an english copy of the film so it was all in Japinise. That didn't seem to matter.

Watching my cartoon collection with Quinn has started to be one of my favorite things to do with her. I really like to see what it is that she is reacting to. So far she seems to have good taste in Cartoons.
Posted by Ethan at 12:13 PM 6 comments:

I haven't seen the film, but I have to agree with his passion.
Posted by Ethan at 3:43 PM No comments: 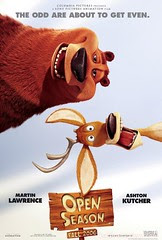 I just saw this today, looks like there's a new movie poster for Open Season.

Looks like the articles about Open Season is starting to pick up. Here's the first big one I've seen:

Honestly I can't think of anything new to say about the Pixar + Disney deal. John Lasseter must be giddy with excitement, I know how much of a Disney fan he is. He worked there once before, imagine returning to your old job, but this time your in charge.

It's too early to tell if this is a good thing over all. Sure Steve Jobs has the biggest share of the board, but there's still 14 members, so it's not like it's a controlling share. It feels like it's a step in the right direction for Disney, but I'm going to miss the independent spirit of the old Pixar. But again it's too early to tell. I hope it turns out to be a good thing.

I thought this article laid it out pretty clearly:

Back From Holiday Break

I'm back at work from a much needed restful holiday break. The best part of my break was spending two uninterrupted weeks with my daughter. I took her to Disneyland for the first time. She's only a year and a half so we weren't able to do much, but I think she enjoyed it. The best part was watching her fact when we took her to the Tiki room. To see her amazement at the singing birds as really fun. It kind of blew all my criticism of the ride away.

DVDs I got for Christmas:
Walt Disney Treasures - Disney Rarities - Celebrated Shorts, 1920s - 1960s
I asked for this because of these shorts:
Lambert the Sheepish Lion
Ferdinand the Bull
Pigs Is Pigs
Noah's Ark

The Glass Bottom Boat
Because it has the short:
The Dot and the Line

Movies I able to catch:
King Kong: Excellent, I really enjoyed this film. Sure it had it's corny bits that I could have done without (Vines, Ice) But over all I liked watching it and I would watch it again. I also thought that they did an Excellent job on the FX. Good animation.

Harry Potter 4: This was easily the weakest book in the series, and as stories go, pretty weak as a film. It's main flaw, that is both int he book and the film is that Harry is always rescued and doesn't appear capable of doing anything himself. That said I really enjoyed the film and thought it was pretty well made. I really enjoyed the dragon on the rooftop sequence, that was a classic.

Narnia: I really hated to see this beat King Kong in the Box Office because I feel like it's a really weak film. Kong and Potter were both really good at describing what it was like to: A. be with a giant ape and B. fight a dragon. For me film making is all in the details not the facts. Details are interesting, facts are boring. I really like it in a film when the film maker describes the details of what something feels like. Other examples, in Poltergeist, I like how they describe what it would feel like to rip off your own face, Shining: what it feels like to have a family member go insane. It's all about how the film maker describes the thing. I felt like Narnia was all facts, and the story is just to weak to hold up the film (sorry CS Lewis, but it is). They failed to describe what it feels like to discover another world, they just report it as fact. What it feels like to fight a wolf, or what it feels like to ride a Lion. Or how about what it feels like to be turned into stone. This is all the stuff that I felt was sorely missed in this film.

Brokeback Mountain: Easily best film I saw over the break. Yha, the details I just described above are in this film *insert joke here* (no pun intended).

Animation Mentor just started it's new semester with a new web update. I have to say I thought it was good before, but it just got a whole lot better.

If you like stop motion you should really check out this website: http://www.darkstrider.net/main.html
Just the Video Clip section is impressive.

I added a new blog to my growing list: http://www.jeffpidgeon.com/ check it out. He's a cool guy, but I sure wish he'd turn on his feed:)

I also added some amazon book recommendations to this site. They're ones I like and think are related to this place. Sorry for the spam, buy one if you like it.

I was happy to see the Butcher give Open Season a good review, so far:
http://www.animationmeat.com/rantsnraves/rantsnraves.html#unique-entry-id-330

You've probibly alredy read a lot about this. There's so many animated films coming out in 2006, it's kinda weird I'd like to say it's a new golden age for animation but that doesn't feel quite right. I hope that most of these films do well. Animation has grown so big and so quickly that I want them to do well to sustain the growth, at the same time a lot of these films seem to be "pissing in the well water". I don't know if our little profession can handle all that piss. But still, I try not to worry about it and try and do the best job on the work that is in front of me, mostly I'm just happy that I have good work to do in front of me. So for me, this boom has worked out pretty good.

It looks like Pixar was unable to get their dream contract. So now it looks like the're going to merge with Disney. I think Disney will still get the better end of the bargen.

I think Cars is going to be great and will get near Nemo box office. But so far my predictions have been way off, >shurg<.

Is there anything else...I'm sure there is. I just can't think of anything.
Posted by Ethan at 11:08 AM 1 comment: