How Feature Films are Written

Here's Monty Python showing us how Films get written:

I like this video, I'll be honest, I'm not a fan of Ralph Bakshi's films. I did like what he did with Mighty Mouse, and I think he has a really nice drawing style and some great cartoony sensibilitys. But beyond that, his stuff just isn't my thing.

I do have to admit that he does make a good point in this video I don't agree with everything he says but I like the attitude in which he says it. Pixar got to be where it is today by making short films, they studied and perfected the craft of making them. And doing that got them to be where they are today. Sure theres a lot of other factors but if Pixar didn't make those shorts they'd still be making software today. A lot of good can come from a well crafted short. Go out there and make one.

This is fun to watch. Someone made a Palindrome video. It works both forwards and backwards. It's pretty cool how they pit it together so the acting works in both directions. 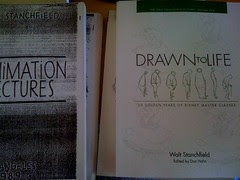 So I bought the new Walt Stanchfield books: Drawn To Life 1 and 2.

I wasn't going to buy them. I figured I already had those notes, I've already read the notes, why did I need more copies of the notes. But a friend of mine bought a copy, and as soon as I flipped it open I knew that I had to get my own. It is really well put together. Color illustration, drawings are reproduced in a nice crisp Kinkos free way. Plus it feels like someone spent time putting the notes in a much more concise order, much easer to read straight though.

If your serious about being an animator you'll get these notes. There is incredibly valuable information in them.

I first found out about these notes at R&H in my first real job in animation. I had a really great director. He liked my work but he thought I could use some help. He said my motion was good and appealing but my poses were weak. He pulled out his set of Stanchfild notes and told me to read them. If you ever seen these notes you'll know what that must have felt like. It's huge, it's like someone handing you a phone book and telling you to read it. I took a look at that giant stack and gave him a puzzled look he said "Just put them in the bathroom, they make great toilet reading."

I did not take them to the bathroom but I did read them and I was glad I did. Walt has a great way of cutting through all the crap and getting to the heart of what really matters in a pose. What is important, what reads and what's entertaining. My favorite lecture is when he's talking about drawing a guy reading a newspaper. He asks what's the most important thing in this pose? He then distills the pose to two dots for the eyes and the paper itself and I'll be damned if doesn't work. It's not just that there's two dots for the eyes but it's also the angle of the dots and their relationship to the paper. Drawn any other way and it wouldn't work. It opened my eyes to the idea of focusing on what's important first and filling in the details later. You can find that note on page 220 of the first book.

The guy had a lot of passion for animation, you can't go 2 pages in without feeling it. They're great for inspiration if your ever feeling the slump. The books are a steal at $30 a pop.
Posted by Ethan at 12:18 PM 2 comments: