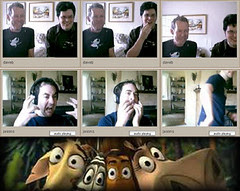 A couple of weeks ago, all the mentors who animated on Madagascar did a making of Madagascar Q&A for all the students of Animation Mentor. It was pretty fun. I went over to Dave's house and Jason talked over the web from the San Francisco area. Matthew Kelly snapped some pictures of the event and posted them on his blog. (I found them via Shhh-Life!-er?)

BTW I finally saw Madagascar over the weekend. I really like how it turned out. I think it has the best computer Animation that DreamWorks has put out so far.

If you haven't seen the film you should stop reading now.


No really. Kuzz I'm going to give away some stuff.


The timing of the animation was very snappy, which is a relief to see (and do) after all those Shrek films. After doing those Shrek films I feel like PDI had built up a complex over "slow & drifty" animation. The animators who worked on the Shrek films had also worked on such films as: "The Lion King," "Nightmare Before Christmas," "LOTR," "Toy Story 1 & 2" and "A Bugs Life" to name a few. So it's safe to say that the Animators could recognise "slow & drifty" animation when they saw it, or created it. But "slow & drifty" was the style that was chosen to be done with Shrek. And (amongst animation circles) this got a lot of criticism. After doing 3 1/2* Shrek films PDI was pretty eager prove to the world that they could do "fast and snappy" type animation. I fell like they proved that they could do this in "Madagascar." Even the softer sentimental shots had snappy animation in them. You could make the argument that maybe it was a little too much, maybe too snappy all the time not enough texture. That would be a valid argument. But the animators couldn't wait to do snappy animation, and it was fun to do, so they did it!

The only thing I was disappointed with in the film is the ending. My contract ran out before the film did, so unfortunately I had to leave a couple months before the film wrapped up. I wish I could have stayed to finish it, but that wasn't to be. When I left there was about a dozen or so endings in the works, and I didn't know which one they would chose. Of the endings they made I think they chose one of the better ones, but not the ending I wanted.

The basic idea I liked in the film was the idea that our main character, the protagonist doesn't know where meat comes from. And when he finds out that his best friend is meat, he has an emotional crisis. Now we have a struggle, what is more important friendship or survival. One of the reasons I love this idea is because it truly can only be done in animation. Now there are only two possible outcomes that I can see. 1) Decide never to eat meat again because your friend is your food, and friendship is more important. 2) Decide to eat meat even after you know where it comes from, just not meat that you know, i.e: don't eat your friends, but eat strangers.

I'm not a vegetarian, and I know the directors are not either, but because of the events that take place the story has a very vegetarian type feel to it. Which is why DreamWorks probably backed off of it. They don't want to fight political battles in kids films. That's also why I feel like it was so weak. I felt like in order to make a satisfying ending they had to make a statement, even if the directors don't believe it. Instead they wimped out and chose to say Sushi isn't your friend, so it's okay. Which is B.S. but leave the doors open for the sequel when Alex finds out that Sushi comes from fish.

Now you could make the argument that if it doesn't talk it's okay to eat it. I'll buy that. The bugs didn't talk in the "Lion King," but the juicy pig did. So it was okay to eat bugs but not pigs. But, as I said, it wasn't a terrible endings, and for what it was, it was well done. It just wasn't satisfying to me as I think it could have been.

With this and "Chicken Run," DreamWorks is building quite a vegetarian cartoon library!

* I consider it to be 3 1/2 films, technicly this isn't true, but I'll let you decide for yourself.
These are all the Shrek films that were done (not counting TV adds):

I was channel surfing the cable and came to rest on a 'behind the scenes' of 'Madagascar'. Before the picture cleared from its digital fog, I recognized the voice from the speaker...then came the face of a old pal of mine from the 'Nightmare B4 Xmas' daze - Facundo Rabaudi, talking about making models for the film. Its great to see that even in the digital age pixel pushers still like to have a real object to be inspired from!
Keep it real...

Cundo is awesome, and has pretty much the coolest job in the whole industry. We usually have one of his super-detailed models on display in the lobby. They totally rock.